FINALLY! After much hemming and hawing and God knows how many tentative dates and cancellations, my first absolutely firm, won't-be-changed, carved-in-stone One Man Show in Los Angeles - Saturday, March 19. Here's the official notice:

Ed Freeman's award-winning series, "Desert Realty," which has been the subject of a widely reviewed book, numerous magazine articles and a dozen museum shows across the country is having its West Coast debut on Chinatown's famous gallery row - at 945 Chung King Road in downtown Los Angeles.

The large format, saturated color prints are an uncanny amalgam of straight photography and seamless computer manipulation. Pictures of mostly abandoned and decaying buildings in the California desert have been scrupulously retouched and enhanced, their backgrounds stripped out and replaced with flawless surroundings and perfectly matching skies. The resultant, hyperreal images tread a fine line between believability and fantasy, between unflinching documentary and surreal perfection. Limited and open edition prints in various formats, a poster suitable for framing and individually printed, signed greeting cards will be available for purchase.

Opening and artist's reception is on March 19, from 6 - 9 pm. Chung King Road is a walk street; parking on surrounding streets is free after 8:00 pm. 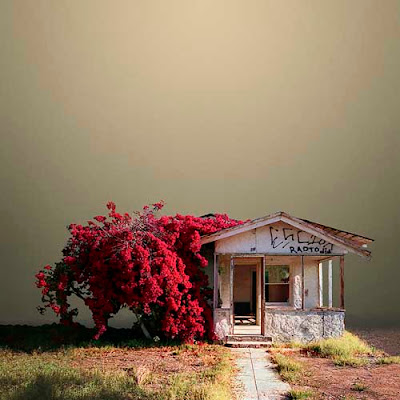 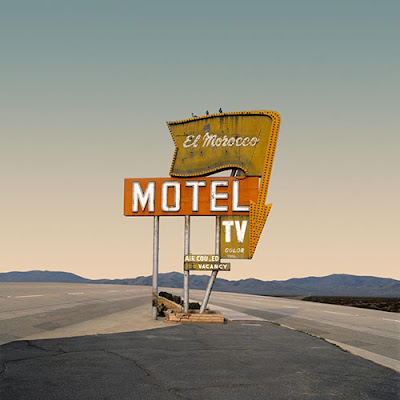 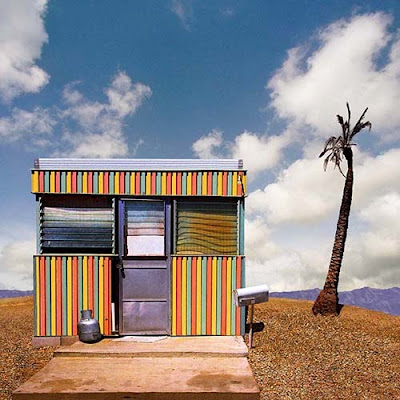 I'm back - fifteen pounds lighter but otherwise, none the worse for wear. Many, many beautiful and fascinating things to show and talk about; right now, however, I'm in the midst of remodeling my new studio in Los Angeles and barely have time to breathe, let alone blog. But here are a few samples (btw, you can click on any of these pictures for an enlarged view - you probably already knew that, but being the computer-challenged old fart that I am, I just figured it out moments ago...) 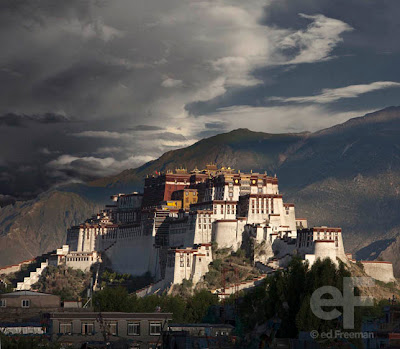 The Potala Palace in Lhasa - pretty sad shape inside, but the outside is still imposing and majestic. 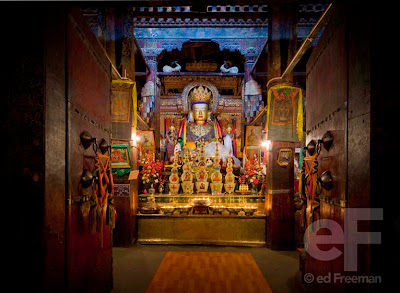 Pelkhor Monastery - one of the few monasteries in Tibet that allows photographs to be taken inside the temple.

On the road to Mt. Everest - hundreds of miles of mountains like this.
Posted by Ed Freeman at 10:51 AM 1 comment:

Smuggled out of China

Yo. Can't access my blog (or Facebook, or any number of other sites) from China, where I am now, so this post is being smuggled out of the country encoded on the wing feathers of migratory birds…

Great country, but if the term "bureaucratic overreach" did not exist, you'd want to invent it for China. You have to get fingerprinted just to get into a national park. Driving through Tibet requires a fistful of permits and standing in line at interminable checkpoints. And God forbid that you should have a picture of the Dalai Lama on you, or take one of some village people, or of the omnipresent military who have turned the whole place into an armed camp, or try to discuss politics with anybody - not that they know much about it, because the media is so censored. But it's all worth it to see scenes like this - here's Mt. Everest on a rare, clear day: 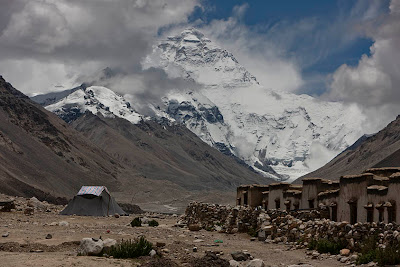 And here's a picture of the restaurant in my most, uh, memorable hotel / flophouse: no running water, no doors on the rooms, no sheets on the beds, no sanitation of any kind, about an hour of electricity at night, but surprisingly, the food wasn't all that bad… 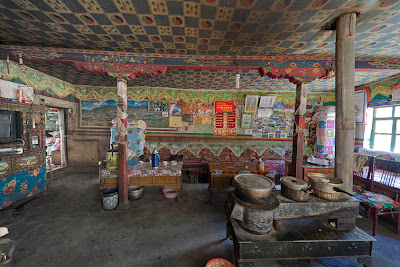 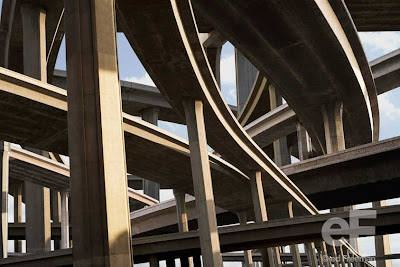 Freeways have a kind of horrible beauty to them, if you observe them dispassionately from a distance and as long as they're not going through your neighborhood. I badgered a friend with an open convertible to drive through my favorite interchange repeatedly while I aimed up and shot as fast as I could, then composited four or five pictures together in Photoshop for this nightmarish image. 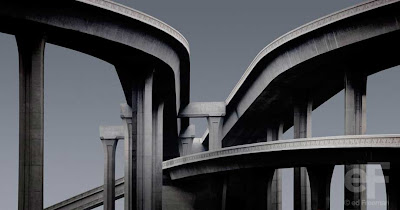 This one, on the other hand, is very real. It's the interchange between the 405 and the 105 Freeways near Los Angeles airport. These pictures are both part of my "Urban Realty" series.
Posted by Ed Freeman at 1:37 PM 25 comments: 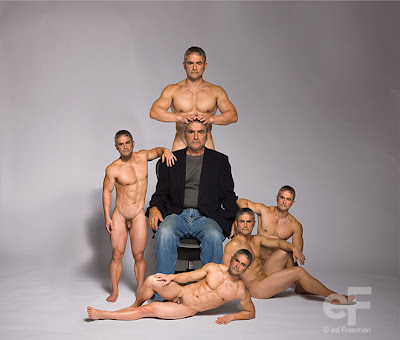 Posting this picture is probably committing professional suicide, but what the hell, live dangerously. I'm they guy in the center, and no, I don't look like that naked; the other guy is Steve Chen, one of my favorite models, with my head spliced on his shoulders. This is one of a series of self portraits I've been doing with Steve, examining issues of body image, aging, sexuality, ego - all those uncomfortable things we don't like to think about. As far as technique is concerned, it's just a matter of taking lots of pictures, cutting them out very carefully in Photoshop and painting in a few critical shadows. BTW, Steve is a good deal taller than he appears to be; I was thinking about Egyptian tomb paintings and how people are sized according to their importance, and of course if you listen to my wildly inflated ego, I'm way more important than anyone else, even my much better looking alter ego...

Okay, I'm back - after a four month hiatus. No particular reason for the long silence; I just can't think of anything to say. But I thought you might be interested in seeing what I'm working on these days - both the weird stuff and the not-so-weird stuff.

These pictures probably aren't going to make it onto the website any time soon, so they're a little extra reward (or punishment, depending on how you look at it) for searching out my blog. 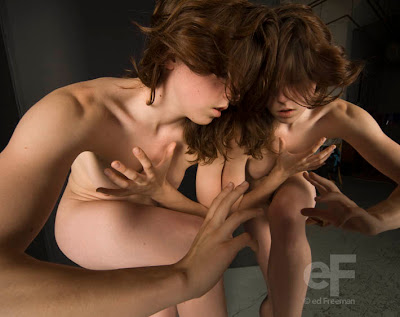 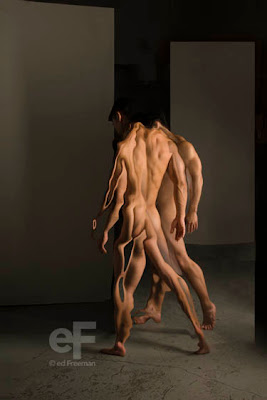 If that's not your cup of tea, how about these ones from my recent trip to New Zealand (and no, don't ask me if they're real or not. You should know by now...) 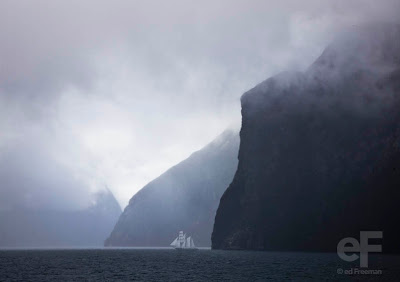 The October issue of Outside magazine has an article damning manipulated photography in general, with me as its principle target. You can see the online version of it here http://outside.away.com/outside/culture/200909/digital-photography-1.html
The author, Rob Haggart, a former photo editor at Outside, makes the argument that manipulated photographs "devalue the work of photographers with the skills and patience to capture awing images in real time. Even worse, modern photo manipulation is seriously screwing up our concept of reality and our willingness to believe what we see in magazines like Outside." He quotes natural history photographer Kevin Schafer as saying that manipulation "waters down the power of real documentary photography."
As a deeply committed photo manipulator, you would expect me to take exception to these arguments – but I don't. I think they're entirely valid. Photo manipulation IS seriously screwing up our notion of what reality looks like. In fact, that's its intent. Any photographer who opens up Photoshop is doing so with the express purpose of lying, cheating and stealing. That's what the program does – that's what it exists for.
So – is that bad? Are we manipulators morally bankrupt? In the interests of honesty, respect for "real" photographers and everybody's healthy relationship with reality, should we pack up our computers and slink off shame-facedly into the night? Should we be the first artists in history forced give up the use of a technology for moral purposes? That's like asking car manufacturers to stop production because cars are screwing up our concept of distance and speed and watering down our relationship with horses. Might be so, but it ain't gonna happen.
Rob Haggart thinks that we – I assume by that by "we" he means everybody on the entire planet, simultaneously – we are "finally getting fed up with all the tampering." He says that digital creations are "bad for photography" – which is sort of like saying the Beatles were "bad" for rock 'n' roll. As if there's some inherent "goodness" to straight photography. As if you could not listen to and appreciate "Maybelline" and the "Sgt. Pepper" at the same sitting. Rob thinks "there's a growing hunger for truth." Nonsense. There's a growing hunger for even bigger lies that we can use as role models.
Because that's what idealized imagery serves as - something to aspire to. Fifty years ago, nobody looked like Superman in real life - now every gym is full of Superman lookalikes. Fifty years ago, extreme sports were the stuff of cartoons - now they're everyday, real life events. Rocket ships to the moon existed in films a long time before they existed in real life. Manipulated photography, like comic strips and and movies back then, creates fantasies that are a leading light in our evolution. We need more manipulated photography – not less – to open us up to new possibilities and inspire us for the permanent state of future shock we all must learn to survive in.
What there DOES need to be, however, is a clear distinction between what we photo manipulators do – work that is increasingly an art of the imagination – and the work of documentarians and photo journalists, who record life with a straight, sober and hopefully, not too creative an eye. I'm sure they don't want to be confused with me, and frankly, I don't want to be confused with them, either.
Here's the picture Outside Magazine published under the heading "This Photo Is Lying to You" – 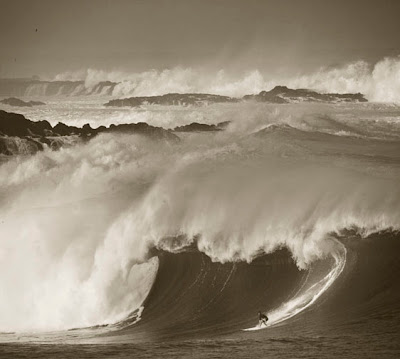 And here's the original, unmanipulated version; not such a big lie after all – just took out a couple of extraneous bodies, made the waves a bit bigger, added a few rocks and some more waves in the background, darkened the sky a bit – a lot of my other surfing pictures are MUCH bigger lies! 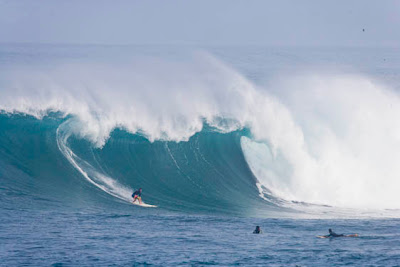 Ed Freeman
Ed Freeman grew up in Boston and majored in French at Oberlin College in Ohio. After college, he worked as a performing musician, arranger and record producer, crafting dozens of pop and jazz records, including Carly Simon's debut album and Don McLean's "American Pie." Starting twenty years ago, Freeman gradually transitioned to his other great love, photography. Since then he has published two books and exhibited widely in galleries and museums, both in this country and abroad. He has been featured in dozens of photography magazines and has scores of cover pictures to his credit. His fine art images are in many private collections and in the permanent collections of several prominent American museums.